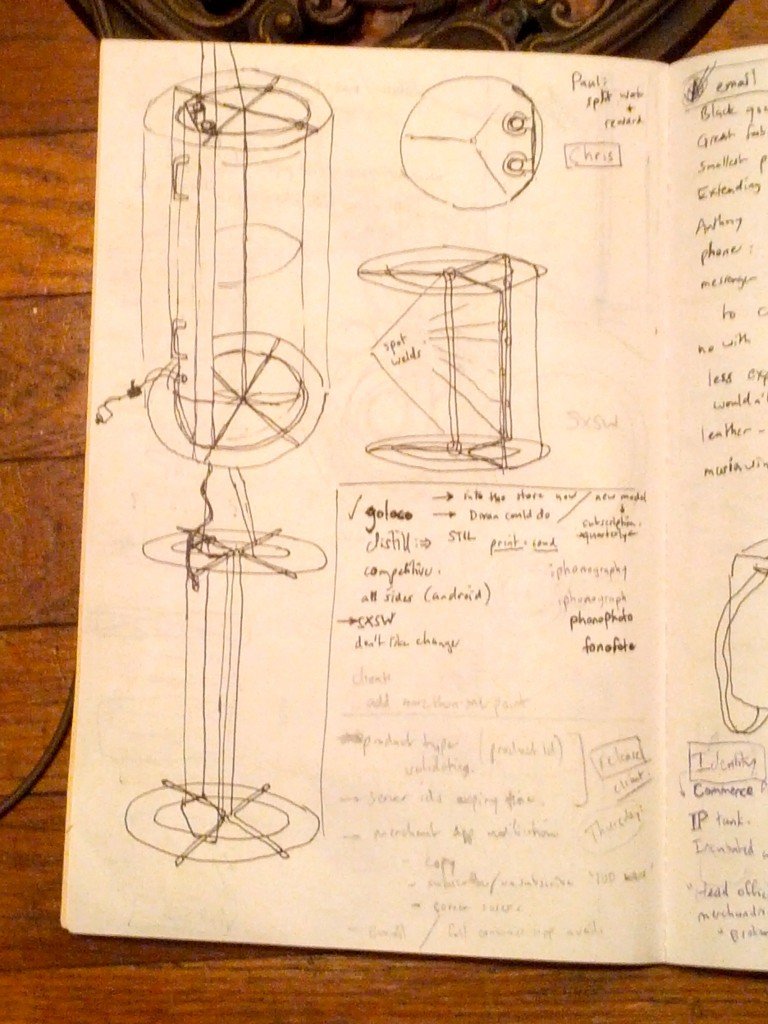 As soon as the standing work table was together, I immediately sketched three new things that I wanted to make right away. One of them was an answer to a problem I’ve been having for a long time. Like most folks,  I’ve tried a half dozen different types of compact flourescents and have never found one that I liked half as much as an incandescent. And for the last few years, I’ve felt especially bad about stocking up on incandescent bulbs while everybody else I know is sucking up and going green. So, I started with three goals: 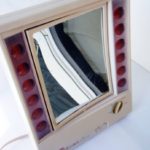 So I started sketching light fixtures: things that would take days to source materials for, and weld together and balance and hang. My fundamental design used a fluorescent office / worklight as the core, and had a diffuser and then an ornamental fabric layer on the outside. I had in mind that it would be a half-cylinder, and sit on the floor and the lighting element would be floor-to-ceiling. Something like this– 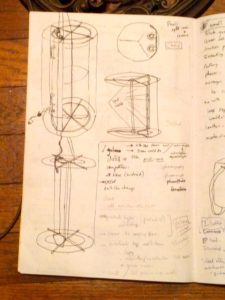 I was afraid of fluorescents since college, when headaches and malaise suffered in a basement electronics lab caused me to change majors (and probably career paths). So I read up: and found that non-sucky fluorescent lights do exist. The T8 format (1-inch diameter bulbs) are way better than the older T12 format. They can be made to be silent and non-flickery, because of an electronic ballast which converts 60Hz power to 10KHz power.

At the store, I found that fixtures are 4ft or 8ft; nothing in between. So I figured out that 4ft is about all I needed to give me light from about thigh-high to head-high. Once I got home, I thought about hanging the fixtures from expanding bolts in the ceiling; but then realized that the fixtures fit naturally right into the corner cut-out. So, just hang it from the picture rail. Once I was into using the picture rail, I visualized hanging the diffuser material and the ornamental fabric from the picture rail as well. For the fabrics I happened to have some white sheer curtains in a packing box from North Carolina; and some leftover spun-fiberglass sheeting from a Startup Weekend project some months back. I was eager to get rid of both of them, because I couldn’t see another application for them arising soon. A half-hour later, with some judiciously drilled holes in the fixtures, and prolific use of hatpins, I had a very pleasant lighting solution in my living room that’s super cost-effective, green, and swanky.